The grande dame of the film and music industries sat down virtually with GreenLight Women President Iris Grossman and members to share stories from her remarkable career and to talk about the future.

February 20, 2021 – Los Angeles, CA – By all standards, Suzanne de Passe is one of the most celebrated and highly regarded business and creative executives in the history of the entertainment industry.  Her career is filled with “firsts” – the first Black artist to be nominated for an Academy Award®, the first Black woman to be president of a major record label, and more. She is one of a handful of women who jump-started the 1970s Womens’ Movement.  But what really distinguishes Suzanne de Passe are her own natural business acumen, her writing talent and her incredible ear. She wasn’t just the most successful woman in the room, she was the most successful executive in the room. She was a fierce competitor, playing on the same field as her male counterparts at the other labels, who watched her make history discovering and shaping the careers of Michael Jackson, the Jackson 5, Lionel Richie, Rick James and many more.

Her career in film and television was launched by her Academy Award® nomination for Best Screenplay for Lady Sings the Blues.  Through her production company, de Passe Entertainment, Suzanne produced the TV shows and miniseries Lonesome Dove, The Temptations, The Jackson’s: An American Dream and numerous NAACP Award shows.

GreenLight Women President Iris Grossman enthusiastically introduced Suzanne to the Zoom audience. “This is very special for me,” said Grossman, “because I started my career as Suzanne’s agent’s assistant. Suzanne was a powerhouse.  She gave me the courage to move forward with my own aspirations.”  Rattling off her many awards – the Oscar®, the multiple Emmy® Awards and 30 other wins and nominations – Grossman acknowledged that de Passe is universally credited with generating 2 billion dollars in revenue throughout her career in the entertainment industry.

“Not that I saw any of it,” laughed de Passe, who greeted the Zoom participants warmly.  She is personable and funny, and refreshingly down-to-earth.

IG:  Tell us how you got into the music business.

SDP:  Well, I loved writing and music from an early age, so it was natural that I pursued that. I grew up in Harlem and went to college at Syracuse (University in upstate New York). I was shocked to find that out of 20,000 students, only 80 were black.  Naturally, that didn’t work for me.  So I went back to New York City.  My first job, this was 1967, was collecting tickets at the Cheetah Club.  It was the hottest club in New York at the time, on 53rd Street, across from the Ed Sullivan Theatre.  I loved music so the owners started listening to me.  I was promoted to talent coordinator and that’s the job where I learned everything about the business – about the unions and the details of how to write a contract, how to work with bands with 9 or 10 members, how long it takes to set up a Hammond B3 organ, which is an hour. I also met Chuck Jackson and Otis Redding and Patti LaBelle.

IG:  Is it true that Cindy Birdsong from the Supremes introduced you to Motown’s Berry Gordy?

SDP:  Yes! It was very funny. Cindy and I were meeting at a club in Harlem, and it was not easy for Black people to get a cab late at night there, so I rented a limo.  And suddenly there was this fuss – “Mr. Gordy’s car has gone on an errand, and he needs a ride!” and so I said, “I have a car.”  And that’s how we met.  I’d never seen anyone as catered-to as he was – people were just jumping for his every whim.  And he hired me to be his assistant.

When I met Diana Ross and Mary Wilson at the Westbury Music Fair, I knew this was the business I wanted to be in.  Diana was breathtaking.  They were about to become the Supremes.  It was very exciting.

“You have to do everything right. And then you have to get lucky.”

IG:  You were the first African American to be nominated for an Oscar® for Best Screenplay.

SDP:  Yes, in 1972, for Lady Sings the Blues. Believe it or not, I am still the only Black woman who has been nominated in this category.  Only one has been nominated in the Adapted Screenplay category as well, Dee Rees in 2017 for Mudbound. I never thought I was going to be the first or only of anything.   People say, “Oh, how great,” but in fact, I censured myself after writing Lady Sings the Blues.  I felt I could never live up to that early success.”

IG:  You made Tommy Lee Jones a movie star in the Western, Lonesome Dove.

SDP: (laughs) I bought the manuscript from Irving Lazar for $50,000.  I thought it was such a great deal. Then I learned that everyone else in town had passed on it.  The process of getting it made was crazy. People couldn’t understand why I was working on a Western.  They think something’s wrong with you if you want to operate outside your “label”.  I’ve always discovered that people are more comfortable with you if you look like the product you’re selling.

IG:  What are you working on now?  How do you find good material now that there is so much competition?

SDP:  I always keep my antennae up. You never know where a good idea is going to come from.

I love what we do – I’m a storyteller.  I’m happiest when I find a story I love – a story with heartache and passion, and then assemble the right team to execute it. And I want to have a good time doing it.

IG:  The business has changed so much from when we were young. How do you deal with young people in the business today?

SDP:  What frosts me is there’s no sense of history.  What came before doesn’t mean anything to them.  I don’t like to dwell on the past, but some of the greatest artists and innovators in the world of music came before today.  We need to celebrate them.  I understand the resentment of young people, wanting us to get out of the way.

What they don’t understand yet is that we don’t completely change into different people – our bodies change, but in many ways our core soul stays the same.  We have the same passions. They don’t know I was once one of the young people in the room – you think you’ll stay that age forever.  But I have a sense of humor about it.

IG:  Outside of winning the Oscar, is there one special event that’s a career highlight?

SDP:  There are many – but I’d have to say Oprah’s Legends Ball 2005. It was a 3-day celebration of African American women in the arts, in entertainment, in civil rights.  The legends were all there – Dionne Warwick, Gladys Knight, Shirley Caesar, Patti LaBelle – all these people I admired, I just couldn’t believe I was with so many wonderful people.  We laughed and partied the whole time.  It is a memory that is seared into my soul.

IG: Suzanne de Passe, thank you for joining us.  It’s been a delight and an honor.

Pamela Rodi is an entertainment industry and non-profit marketing, creative and branding consultant, who recently worked with Sony Pictures International on Once Upon A Time In Hollywood and It’s A Beautiful Day in the Neighborhood. She sidelines as a website editor, digital ad designer and content writer. 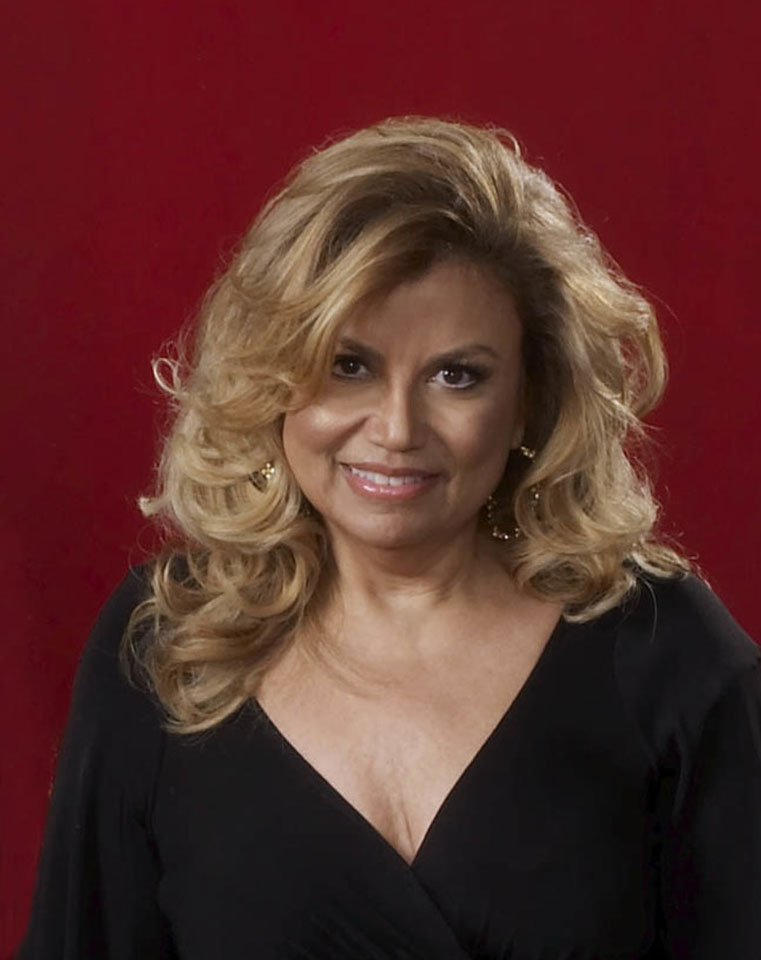 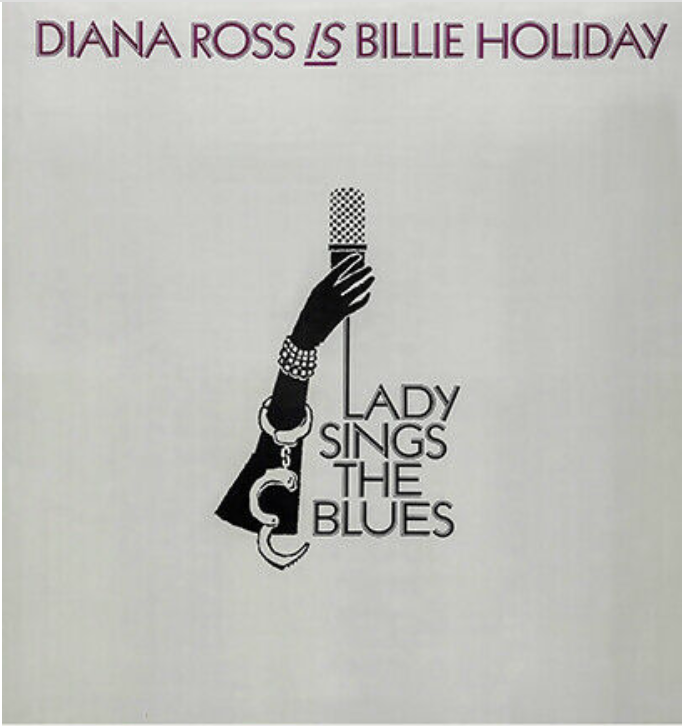 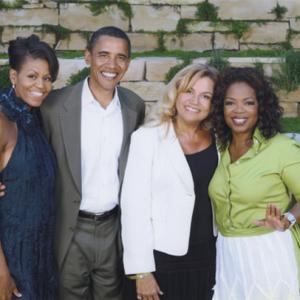 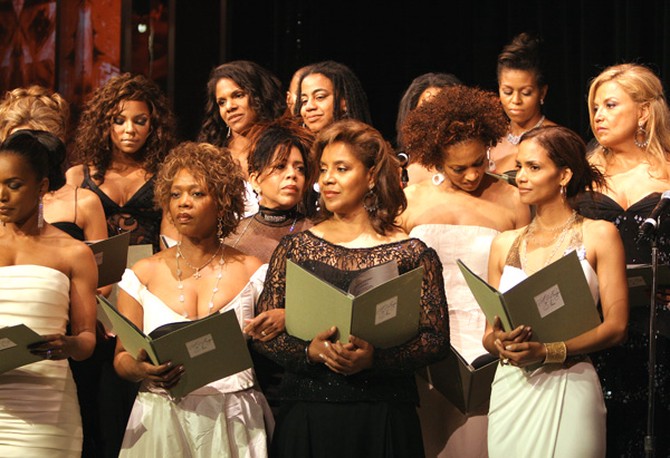 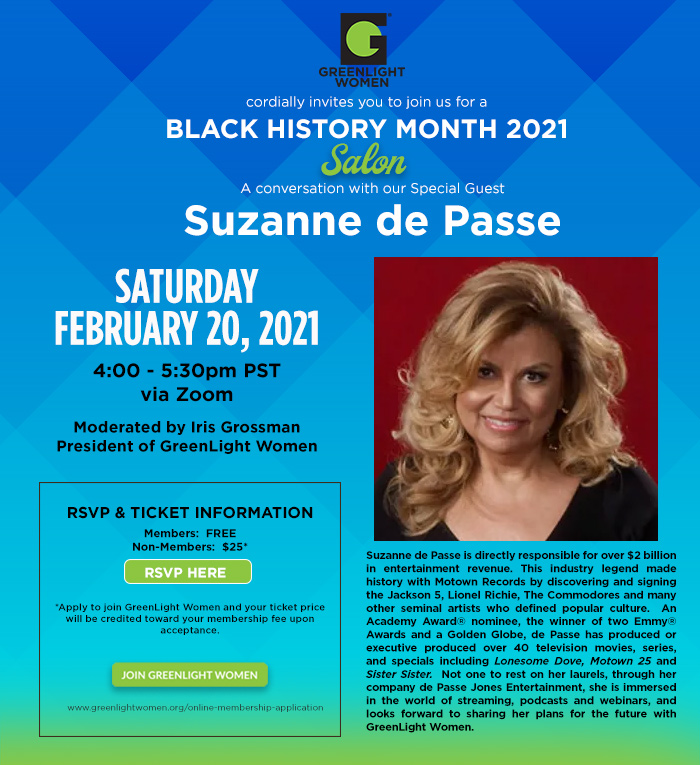